People who Promoted the Memory of JCM 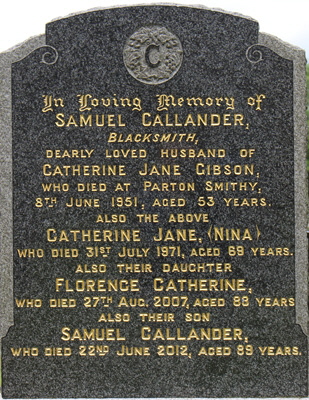 Sam Callander died at Parton on 22 June 2012 just before his 90th birthday, and, like JCM, is buried at Parton Kirk. He was educated in Newton Stewart and Castle Douglas High Schools. Sam moved with his parents to Parton in 1936 when his father became the local blacksmith living at the smiddy. Sam continued to live there, and was employed as a skilled millwright by J & R Wallace, Agricultural Engineers in Castle Douglas for 48 years.

Sam Callander devoted much of his life to promoting the memory and achievements of James Clerk Maxwell of nearby Glenlair. Sam's knowledge of all things pertaining to Maxwell became encyclopaedic – an interest first fostered by a previous minister in Parton. Largely self-taught, he came to comprehend the nature of Maxwell's laws of light, electricity and magnetism which laid the foundations for radio, television and radar; and Maxwell's work on colour which became the basis for colour television.

As Sam's knowledge grew, so too did his collection of books and artefacts relating to Maxwell, this is now owned by the James Clerk Maxwell Foundation and is known as 'The Sam Callander Collection". Among the collection of papers and memorabilia which Sam gathered and periodically put on display at Parton village hall, were biographies of Maxwell in foreign languages including Japanese, Chinese and Russian, presented to him by the authors. The sweep of Sam's exhibitions was very wide – with something for everyone and much for many: from historical detail of Glenlair through incidents and people associated with JCM as a child, and later as laird and scientist. The effort of mounting the exhibitions must have increased over the later years, but Sam seemed to take it all in his stride.

In his retirement Sam ran the village store and post office in Parton and therefore was often the first port of call for strangers looking for the great man's grave . Sam's continuing welcome over the years to the visiting scientists, academics and JCM enthusiasts who landed on his doorstep from all over the world was legendary.

An eloquent tribute to Sam was paid in the Scottish Parliament on the occasion of the commemoration in 2006 of the 175th anniversary of Maxwell's birth. During the debate, Alex Fergusson, MSP for Dumfries and Galloway said: 'I cannot talk about James Clerk Maxwell without mentioning the remarkable Sam Callender of Parton village. He has become a walking encyclopaedia on James Clerk Maxwell, and provides a wealth of knowledge to Parton's visitors. He is a true and utterly devoted individual, and I am delighted that he has been able to join us this evening."

Over the years Sam was contacted by many people researching Maxwell's life, including Prince Charles and Lord Reith, first Director-General of the BBC, with whom he corresponded for a time. Lord Reith's father had been a student of Maxwell at Aberdeen. Sam was invited to dine at the Royal Society; and he was also invited in 2008 to the unveiling of the new statue of JCM with his little dog Toby – the first statue to be raised in George Street, Edinburgh in 98 years. This was an event which brought Sam huge pleasure and pride.

Sam presented a dapper kilted figure on many occasions at various Edinburgh venues, when concerts, plays and exhibitions were organised by the JCM Foundation to raise awareness of Maxwell and funds to buy the Birthplace. One ambition dear to him and not achieved in his lifetime was for the UK to achieve a commemorative postage stamp featuring Maxwell. To his disappointment Royal Mail has not yet obliged! But Sam did have his own stamp collection - stamps from other countries featuring the great man. 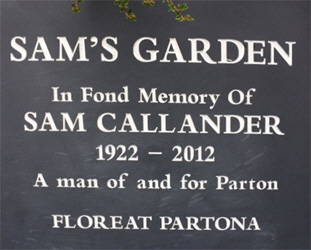 James Clerk Maxwell was not the whole story in Sam's life. His great energy and enthusiasm for the life of the community of Parton rightly earned him the local sobriquet ‘Mr Parton'. His many interests included amateur dramatics – he was one of the founder members of the Crossmichael Drama Group - also gardening; stamp collecting; photography; Scottish country dancing; wine-making (well, he tried!) His interest in local history involved him as a founder and committed member of the Galloway Preservation Society.

Throughout Sam's life his personal religious beliefs were important to him – as was the case with Clerk Maxwell. Sam was a faithful servant of the Kirk in Parton, being ordained elder in 1951 and serving for over 60 years. Other offices he held within the Kirk over the decades included Sunday school superintendent; beadle; bell ringer; treasurer. He held the post of village hall keeper for over 60 years, could this be a record? A garden at the village hall is named in Sam's honour and was dedicated at a ceremony in April 2017.

In all these activities, interests and involvements in the life of Parton village and the wider setting of Dumfries and Galloway, Sam will be remembered for his quiet and unassuming manner, his gentle sense of humour and the twinkle in his eye. It was standing room only for Sam in Parton Kirk: he will be sorely missed by many. 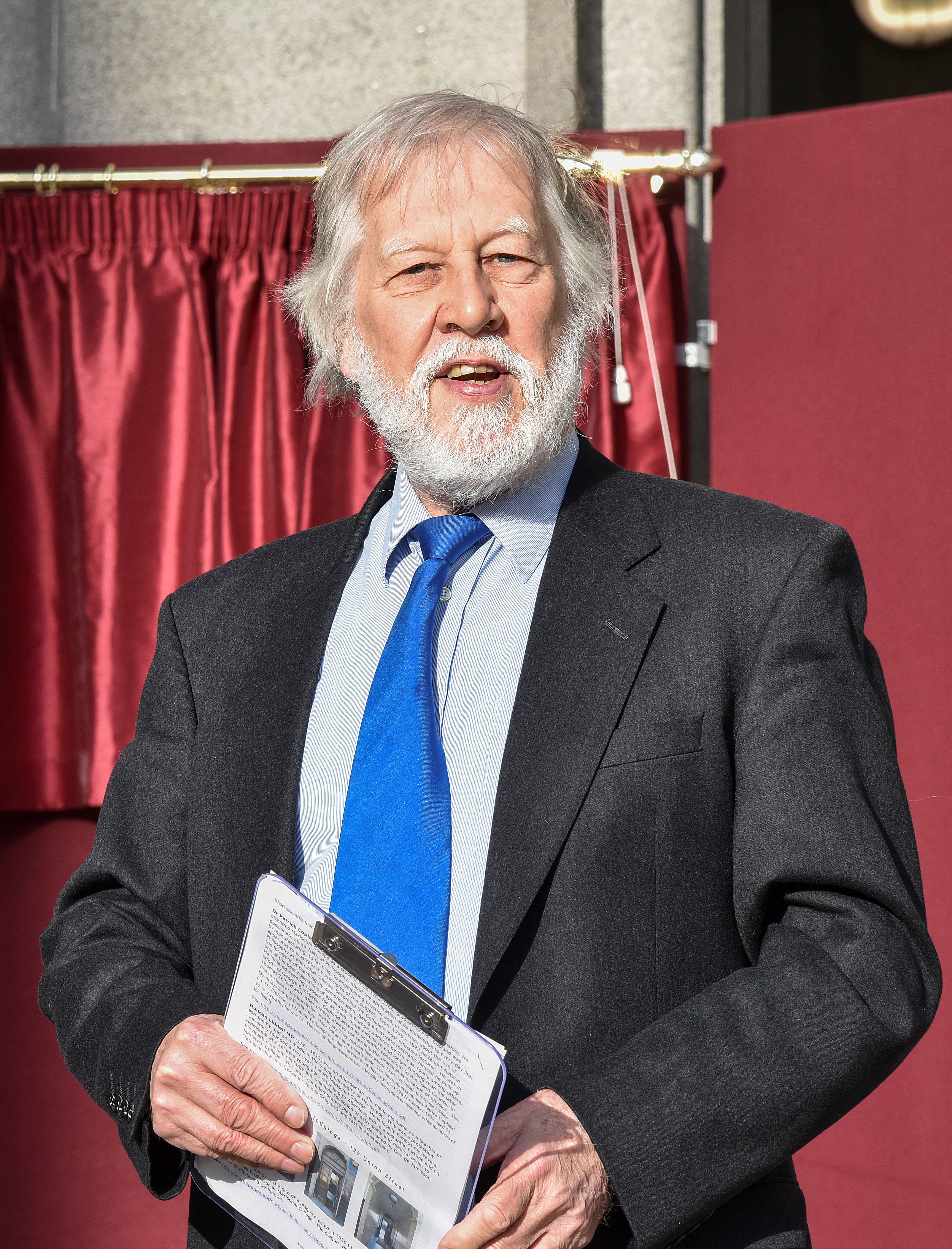 The James Clerk Maxwell Foundation (JCMF) was very sad to hear of the recent passing of our colleague John Reid.

John was a Physicist at Aberdeen University for about 40 years. He retired in 2007 and kept his connection as Honorary Senior Lecturer in the School of Natural and Computing Sciences. He greatly admired the work of James Clerk Maxwell (a former professor in Aberdeen) so he became a Trustee of the JCMF in 2008 and gave us great support, wisdom and company in that role until stepping down in 2020.

He wrote a very interesting and entertaining memoir of his own life, interests and career. He describes his choice of career as being that of "a graduate who stayed behind." He notes that he taught a huge range of courses over his career and the list covers an impressive swathe of the physics curriculum! He was passionate about communicating science to his students and a wider audience.

Over many years, alongside his work as a physics lecturer at Aberdeen University, he produced a great deal of informative and scholarly material on the work of Maxwell, and indeed on other topics in the history of science. His colleague Dr Ben Marsden notes for example that he was a "vigorous and untiring advocate for the University's scientific instrument collection".

Some of his excellent public outreach work on Maxwell can be found here and on his Aberdeen website.

His colleagues in the JCMF will miss him. 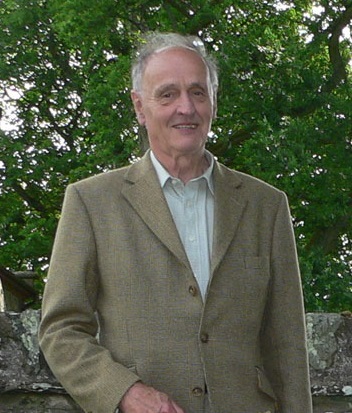 David Ritchie, was educated at the Edinburgh Academy, proceeded from there to Cambridge University where he studied engineering and became the Research Director for Barr and Stroud, specialising in submarines and periscopes and their ability to exploit of all parts of the electromagnetic spectrum. After he retired from Barr and Stroud, David Ritchie became a visiting Professor at Paisley University.

In 1987, he was approached by Sidney Ross to become a Trustee of the James Clerk Maxwell Foundation. Over the years, David Ritchie has filled many rôles for the Foundation, showing great dedication. For example, in 1993, David, as Director of Development, took on, with assistance from myself, the task of raising £500,000 to enable the Foundation to buy the town house (pictured on the left) in the New Town of Edinburgh (14 India Street) where James Clerk Maxwell was born. He worked tirelessly in writing hundreds of letters to individuals, trusts and charities to seek contributions.

In order to help the Foundation to buy 14 India Street, David gave a gift of £21,320. Furthermore, David and Elmer Rees (Professor of mathematics at Edinburgh) persuaded the Scottish Office to make an interest free loan of £100,000 to help the Foundation to buy 14 India Street. David Ritchie and I succeeded in raising the necessary £500,000 to buy 14 India Street and thereby establish Maxwell's legacy in Edinburgh. Furthermore, David Ritchie, by filling out many forms, succeeded in obtaining a grant of £75,000 from the 'National Heritage Memorial Fund', to help fund the restoration of the fabric of the house as well as having the house surveyed by 'Historic Scotland' in order to determine its original colour scheme.

Buying 14 India Street, where Maxwell was born, was acknowledged by our Founder, Sydney Ross, as being a 'master-stroke'. Sydney Ross acknowledged that, without David Ritchie (with assistance from myself) working together to raise the money to buy the house, the Foundation would only ever have existed on paper. Sydney acknowledged that the purchase of the house in with Maxwell was born has had a transformative effect on the Foundation.

David Richie, himself an FRSE, donated to the Royal Society of Edinburgh a fine portrait of Clerk Maxwell (which he had commissioned and paid for) and which now hangs in the 'Maxwell Room' in the RSE along with a hologram of the Maxwell statue.

Thus, no persons could have done more for the Foundation than Sydney Ross and David Ritchie. Their membership of the RSE and their portraits hanging in the house are recognition of what they have done to create the Foundation. 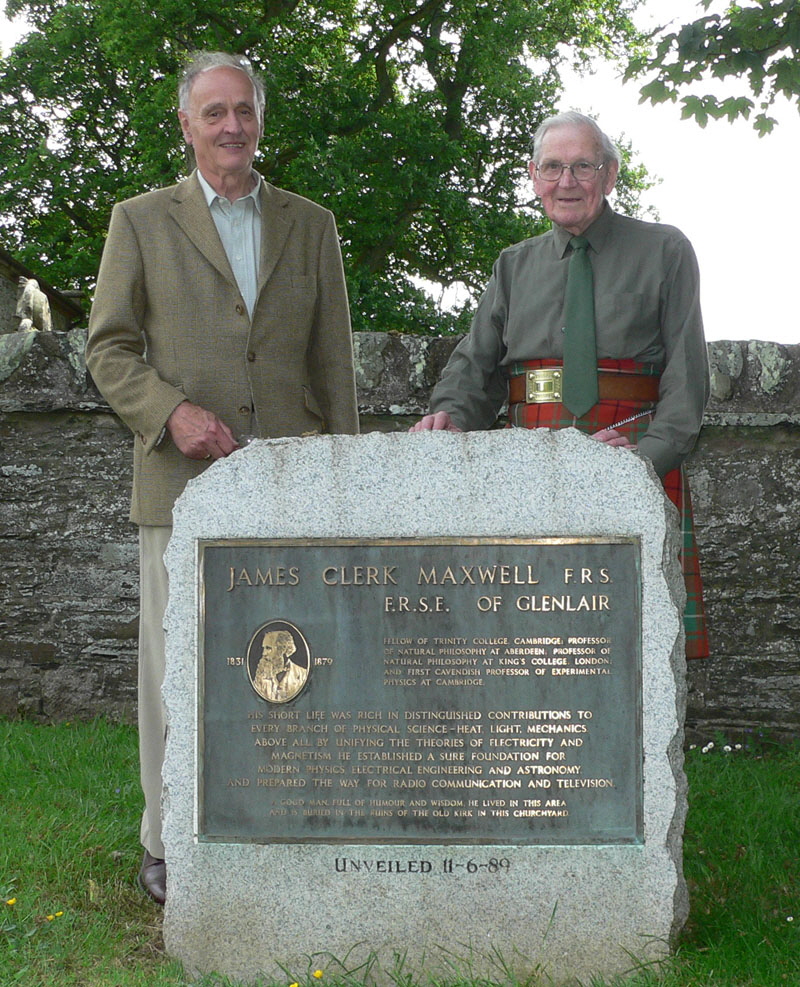